And yes, its been over a month! I think I will be posting regularly now, but then it feels like I'm always saying that.

Anyways, I got a couple of good picture of my Eid makeup and now I do remember most of the products but not all #fail. However, you can find similar colors probably in you own makeup collection especially since  none of the products I used are really standout-ish.  Most of what you see can easily imitated by other products and I think that is why I can't remember.

Here are the pictures: 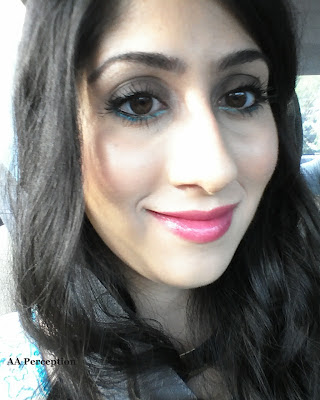 So here we have the first photo which was taken outside:
On the Eyes:  Avon ultra luxury eyeliner in Dark Brown used a a base all over the lid, followed by the darkest brown in the Maybelline eyeshadow quad in Chai Latte in conjunction with the second darkest shade in the quad. I used the lightest shade in the quad as my high light as well as a bit of Virgin from the Naked Pallette.

The blue liner at the bottom was done with two eye liners, I used Annabelle Smudge Liner in Atomic Surf (Bluish -Sea Greeen) in the inner half of my bottom lash line and on the other half I used Urban Decays 24/7 Glide-On eye pencil in Electric. To finish up the eyes I used my Loreal Voluminous Mascara in Carbon Black and I also used a bit of Maybelline's Line Stiletto liquid eyeliner in blackest black.

Face:For foundation I used Lancome Tient Idole Ultra 24H in 230W, Kat Von D tattoo concealer in medium to conceal and under my eyes I used Maybelline Instant Age Rewind Eraser concealer.  For contouring I used Hoola by Benefit followed by Madly and Orgasm both by Nars. For my highlight I used my Bobbi Brown Shimmer Brick in Beach. 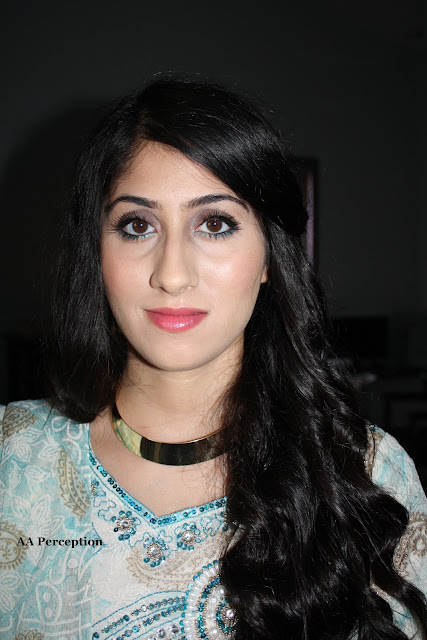 Lips: This is the part that I forget! This picture was taken inside and my lips look different in both of the pictures. I'm pretty sure I used my Dior Addict High Shine lipstick in 594 a similar color to this is the Revlon Colorburst Lip Butter in 090 Sweet Tart. For the added shine I believe I used the Clarins instant light natural lip perfecter in 01.

Anyways, that is my makeup used in the photos and apologise about forgetting what is on my lips if I remember I will edit the post!

Hope your all doing well and TGIF in a couple hours!
Have a good weekend!
Farha
X